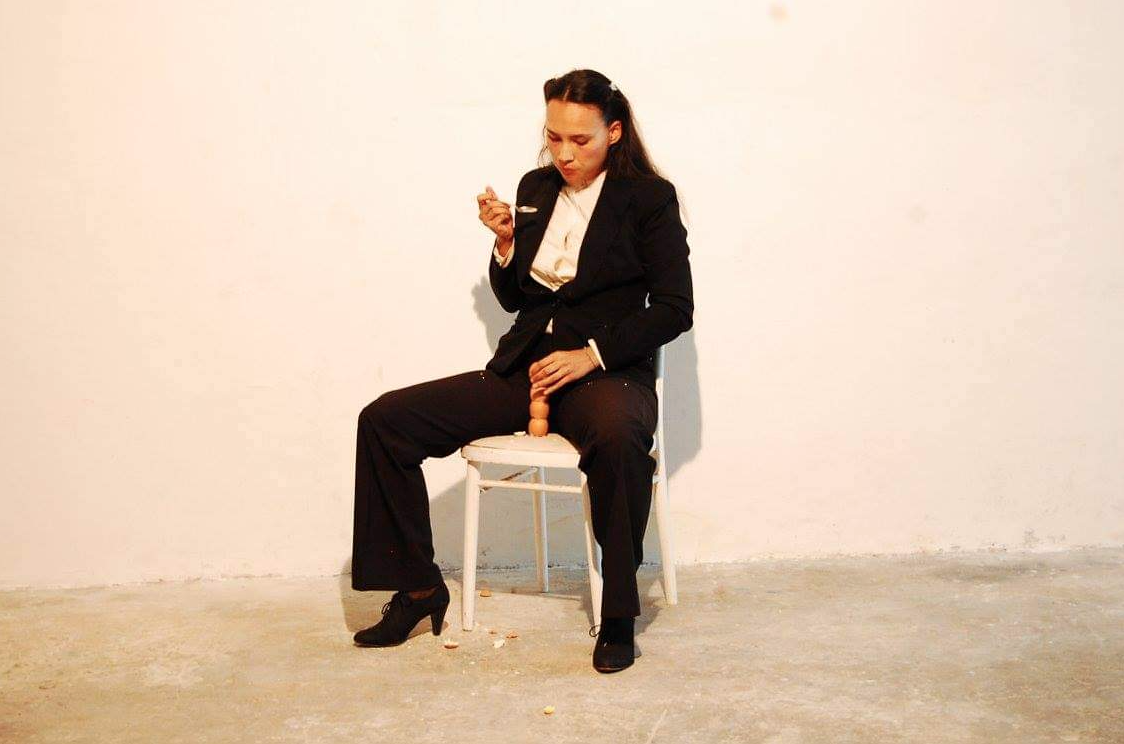 Born in the UK , raised in Brussels to an Anglo-Belgo Ecuadorian family, Kathleen Meyts Coba attended the University of the Arts London ( at first Chelsea then Camberwell ) with a brief spell at UCL . She graduated with a BA in Fine Arts- Sculpture though her practice was mainly focused around performance art. Her work exists as live performances as well as video. ‘Using performance as a conduit for memories, I try to create mental images, which can then be used by the viewer as a way of defining fugitive emotions. Some of the recurring themes in my practice are identity, the body, sexuality and communication.’

She worked as a performer at the Institute of Contemporary art in London in the interactive piece ‘This Objective of that Object’ by Tino Sehgal . Jan-March 2005. She has also performed in the ‘Transart Communication’ performance festival at the 4D Gallery Galanta Slovakia in 2017 and that same year founded ‘Objects of Desire’ a festival of performance art which ran at the PUCCS gallery’s for a month from May-June 2017 where she also performed. The festival had 15 performances with over 30 people involved over its course, performing solo or up to groups of 5. It encompassed Dance with The Forest Ensemble: Directed by Ram Mazliach Atkin with Gregory Chevalier, Balla Marta, Jáncsó Kata H, Ambrus Zoe, Raquel Ruiz, story telling by Jay Miller, humour-noir clowning by Szabó Veronika, but was mainly fine art performance art based with Liu Nanxi + Juhász Rokko, Stuart Sutherland David and MONOFOG, Gergelyi Lőrinczi and Zászlós Mariann, Magyari Lilla + Borsos Luca, Lori Baldwin, Ajay Sharma who came from India especially for the event on sponsorship, Kovács István, Dénes Imre, Molnár Ágnes Éva and Szirtes János. Some performances lasted for hours, such as Roi Vaara performing twice over the span of 2 whole nights long, or were shorter performances, some performed twice in a day such as Jay Miller with his storytelling .

And now 5 years on the time has come to once more to curate ‘PUCCS’s next festival of performance art, this time choosing to focus on fine art performance art . ‘Objects of Desire. Vol ll: Some Old things, Some new things, some borrowed things and something PUCCS.

Puccs Contemporary Art provides a forum for curators to present engaging, non-commercial art which is both visually and intellectually stimulating.

Find Puccs on a Map